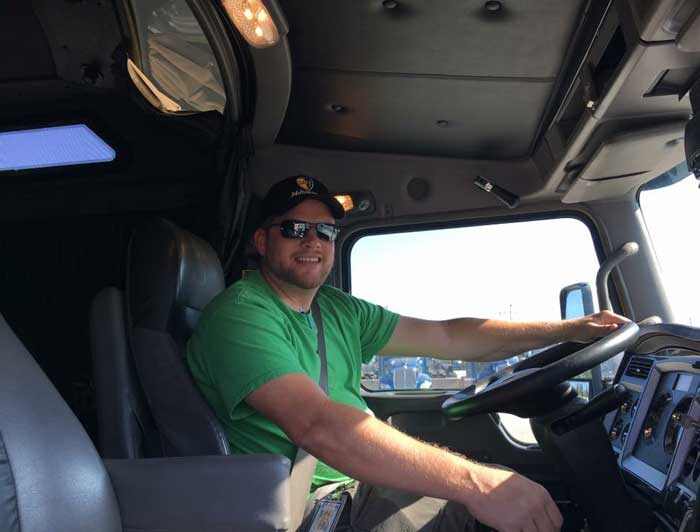 Georgia Driving Academy would like to congratulate Daniel Shonebarger, a 2016 Columbus, GA graduate, on being named to Trucking’s Top 10 Rookie Finalist list. This is a huge accomplishment, and we could not be prouder. We sat down with Daniel to see how he has been doing since graduating from his CDL training and learn a little more about his background.

Since receiving his CDL license, Daniel has taken a job with Melton Truck Lines. Daniel said his time at GDA was great. He thoroughly enjoyed his instructors and how knowledgeable and patient they were with him and other students. Daniel shared that he chose to get his CDL license because trucking had always been a passion of his. He has always enjoyed driving “the biggest vehicles on the road and the responsibility that brings.” For Daniel, shifting through 10 gears with 80,000 lbs. gives him such a rush. For us, it seems that the trucking industry was made for Daniel!

Before beginning his career as a truck driver, Daniel served in the U.S. Navy. For eight years, he helped protect our country, and we could not be more grateful. Daniel was stationed onboard the USS Boxer LHD4 in San Diego, CA for five years and later, serving three years at the Fleet and Industrial Supply Center at Pearl Harbor, HI.  Daniel shared that he loved being in the military because he was able to travel the world and see other countries full of different cultures, languages, and food.

Life on the Road

Now as a truck driver, Daniel is still able to travel, but this time throughout the United States. Since becoming a trucker a little over a year ago, he has seen “a gold mine in the middle of a desert, an abandoned military base on an island that looked like the shoot of a zombie movie, the top of the Rockies, delivered to the downtown of almost every major metropolitan city and the cornfields in the middle of Iowa.” Daniel thanks the military for helping to prepare him for the trucking industry, and giving him the discipline necessary for the job.

At the end of the day, Daniel’s true motivation comes from his family. He has been married to his beautiful wife, Jessica for fifteen years and has two children, Aaron and Danica. Day-after-day they give him the drive to pursue his passion in trucking. His goal is to one day own his own truck and continue providing a future for his family that he can be proud of. For Georgia Driving Academy, we want to send our best wishes to Daniel and applaud him on his success thus far in the trucking industry.

Daniel earned his CDL by training at Georgia Driving Academy. GDA provides Class A and Class B CDL training services for Georgia residents. If you’re interested in beginning a career as a professional driver, learn more about our CDL training programs.